How can Apple get it so WRONG???

I never saw this day coming! Apple getting it wrong!

As we all know Apple are masters at making money and getting us to buy all their sexy gadgets with the sexy accessories to go with it. Not mentioning making us buy charging cable after charging cable, when Nokia managed to make chargers in the year 2000 that still work now!! Usually the UX is so simple and doesn't require you to think.

Anyway this Apple Pay has got me a few times, at first I thought it was just me being tired. Today it got me again, so I thought I'd try it with my wife and she did exactly the same thing as me.

When paying for items with Apple Pay you are presented with a little popup detailing what payment method you want to use and a few other checkout details. The bit that gets me is the red fingerprint that is displayed on the screen, which I always press instead of actually  touching the home button, until my brain tells me to stop being stupid and touch the home button.

As I said previously I tested it with my wife and asked her to use the touch id to pay for something and she also touched the screen instead of the home button. Although she is a Samsung fan it is a fair UX test! 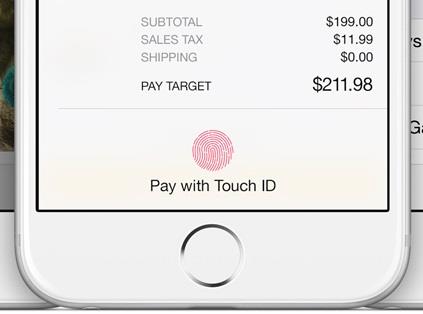 Has this happened to you?

How many people will just give up after frustratingly touching the screen multiple times? It can't just be me who has noticed this. In my humble opinion a simple design change of an arrow pointing to the home button would make the UX so much smoother.

If apple make this design change, you heard it here first!

Apple i'd like a 10% cut of the increased sales! Thanks